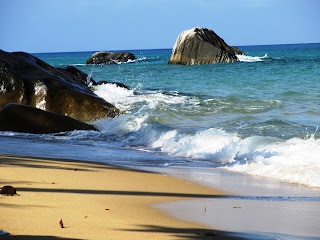 We spent the morning playing on the sand. I went snorkeling, but only for a short while. Little R found it traumatic and had hysterics at the sight of me disappearing under the ocean waves. B tried to amuse her but it was no good. All she would say is, "Na Na Na! Mummum! Mummummmm!", while waving her hands frantically, tears running down her cheeks.


So I stuck close to land instead, which was fine. Tioman is really beautiful. 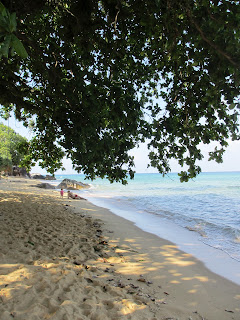 Finally we boarded the speedboat and then the plane, bound back to Singapore. Even though the flight is quite short (less than an hour, even on Berjaya Air), it is literally a different world. It was sort of shocking returning to the modern city's hustle and bustle!