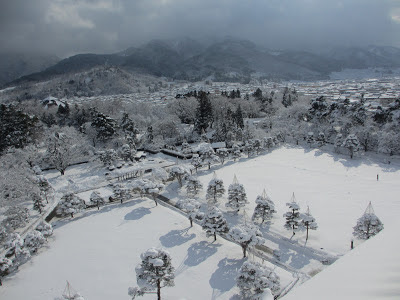 After I got my ruin fix, we took the train to our final destination: the samurai town of Aizu Wakamatsu.

Back in samurai times, the Aizu clan was famous for their single-minded loyalty to the shogun and for the martial skill of their fighters. A standing army of 5000 was quartered there and used for security operations throughout northern Japan. So not surprisingly, when the Meiji Restoration took place in 1868, the clan went to war (this war was the partial inspiration for Tom Cruise's movie The Last Samurai BTW). Obviously they lost: their castle fell to the Imperial forces (and was afterwards torn down by the government as a punishment).
It's still quite traditional today, with many remnants of the samurai days still extant: gardens, samurai residences, the school for the sons of the samurai retainers, and many stores selling traditional crafts (including sake breweries: Aizu is famous for its traditional sake). The castle grounds are still preserved, and now contain a reconstructed castle (built in the 1960s).
It snowed heavily almost the entire time we were there, which added to the sleepy, out-of-time feeling of the town. It's a charming place, and I would love to go back at some point (as we didn't have enough time there to see everything).
We chose to stay just outside of the main city, at Higashiyama Hot Springs Resort. Supposedly it was founded by a monk 1,300 years ago, though the hotel building itself is quite modern. The views were incredibly scenic and the bathhouse facilities were excellent (not rustic like those at Nyuto Onsen, but boasting multiple indoor and outdoor pools of different temperatures). R loved it because the hotel was so child friendly: they had toys to take into the hot springs and even a dedicated playroom, fully stocked with toys of all sorts.
We were sorry to leave Aizu-Wakamatsu, so sorry that we postponed our departure to the very last moment possible: which meant our last day in Japan was pretty much utterly hellish. We almost missed our train out of Aizu-Wakamatsu (we had to sprint to the train platform in order to make it: NOT COOL when hauling too much luggage and a cranky toddler); got separated in Tokyo when trying to eat lunch, meaning that we missed our train to the airport; and then in an attempt to take a different route to the airport, accidentally took the slow train. We arrived at the airport about 40 minutes before our international flight to Singapore was departing, only to find that my passport was possibly no longer valid (Japan requires passports to be valid for at least six months, and this deadline had passed during our visit). Most thankfully, the Japanese are incredibly efficient and helpful, and we made the flight by the skin of our teeth.
I was in a constant state of panic for hours straight though (we really needed to make the flight, as B had an important meeting the next day: plus being stranded in a foreign airport at night--the flight was at 7 pm and was the last of the day--with a toddler would have been absolutely terrible). It was terrible and I am never doing that again, regardless of how charming a town is!
Posted by Grace at 10:54 PM